Background
Theory and research suggest that sensory processing sensitivity (SPS), found in roughly 20% of humans and over 100 other species, is a trait associated with greater sensitivity and responsiveness to the environment and to social stimuli. Self-report studies have shown that high-SPS individuals are strongly affected by others’ moods, but no previous study has examined neural systems engaged in response to others’ emotions.

Methods
This study examined the neural correlates of SPS (measured by the standard short-form Highly Sensitive Person [HSP] scale) among 18 participants (10 females) while viewing photos of their romantic partners and of strangers displaying positive, negative, or neutral facial expressions. One year apart, 13 of the 18 participants were scanned twice.

Conclusions
As predicted, for partner images and for happy facial photos, HSP scores were associated with stronger activation of brain regions involved in awareness, empathy, and self-other processing. These results provide evidence that awareness and responsiveness are fundamental features of SPS, and show how the brain may mediate these traits. 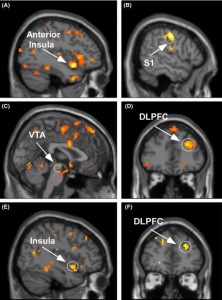 Images showing brain activations significantly associated with higher scores on the Highly Sensitive Person (HSP) scale scores (controlling for neuroticism scores) at Time 1 for the partner happy versus stranger happy condition in the (A) anterior insula (AI), (B) primary somatosensory cortex (S1), (C) ventral tegmental area (VTA), and (D) dorsolateral prefrontal cortex (DLPFC); and for the partner sad versus stranger sad condition in the (E) insula and (F) the DLPFC.

To read the complete study go to NBCI.com