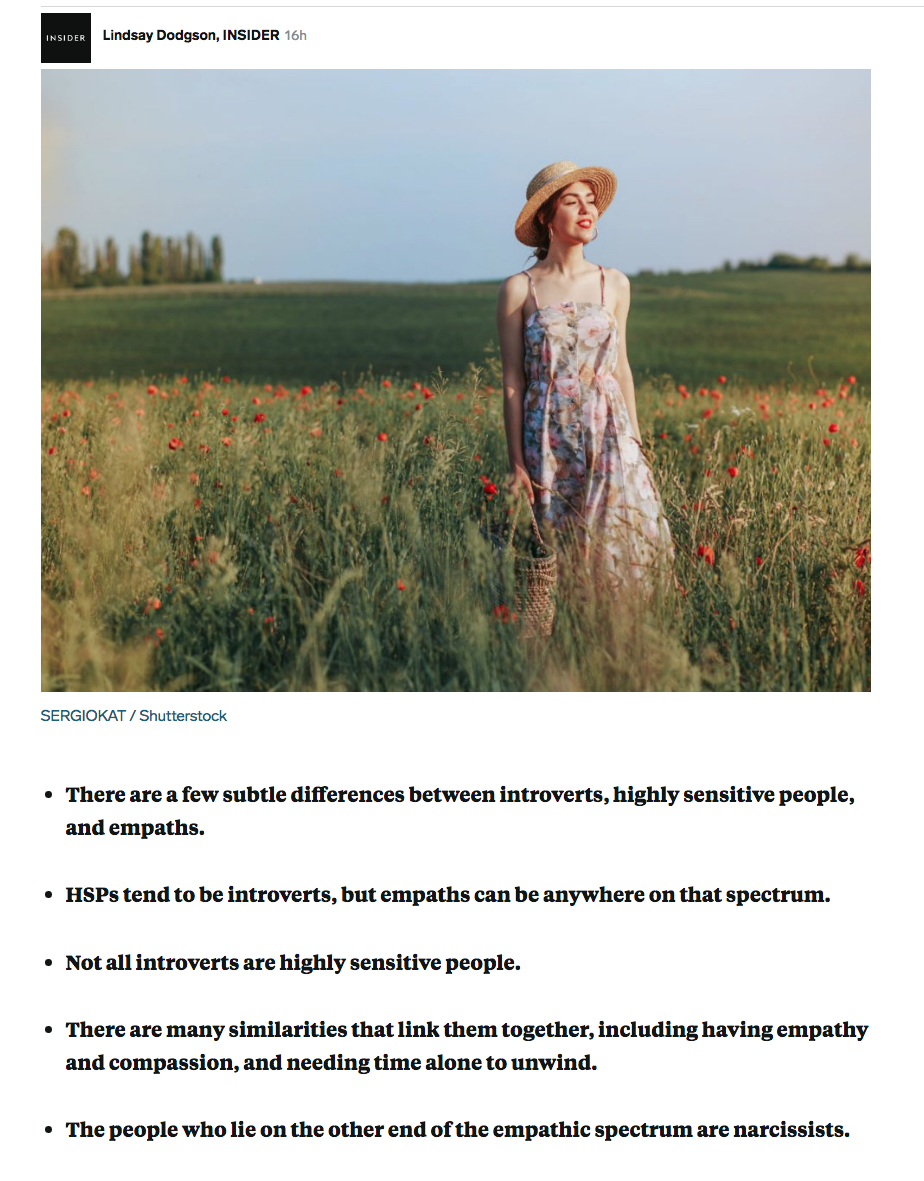 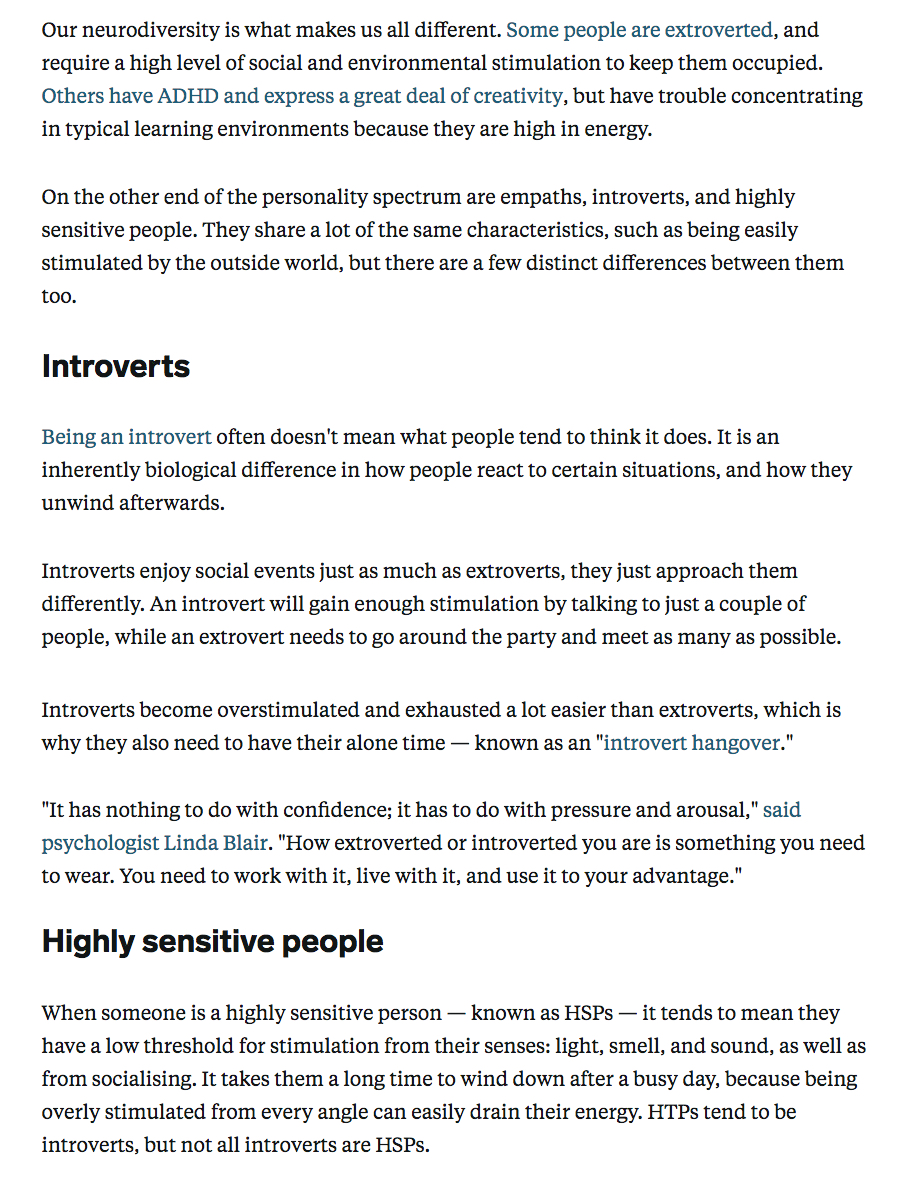 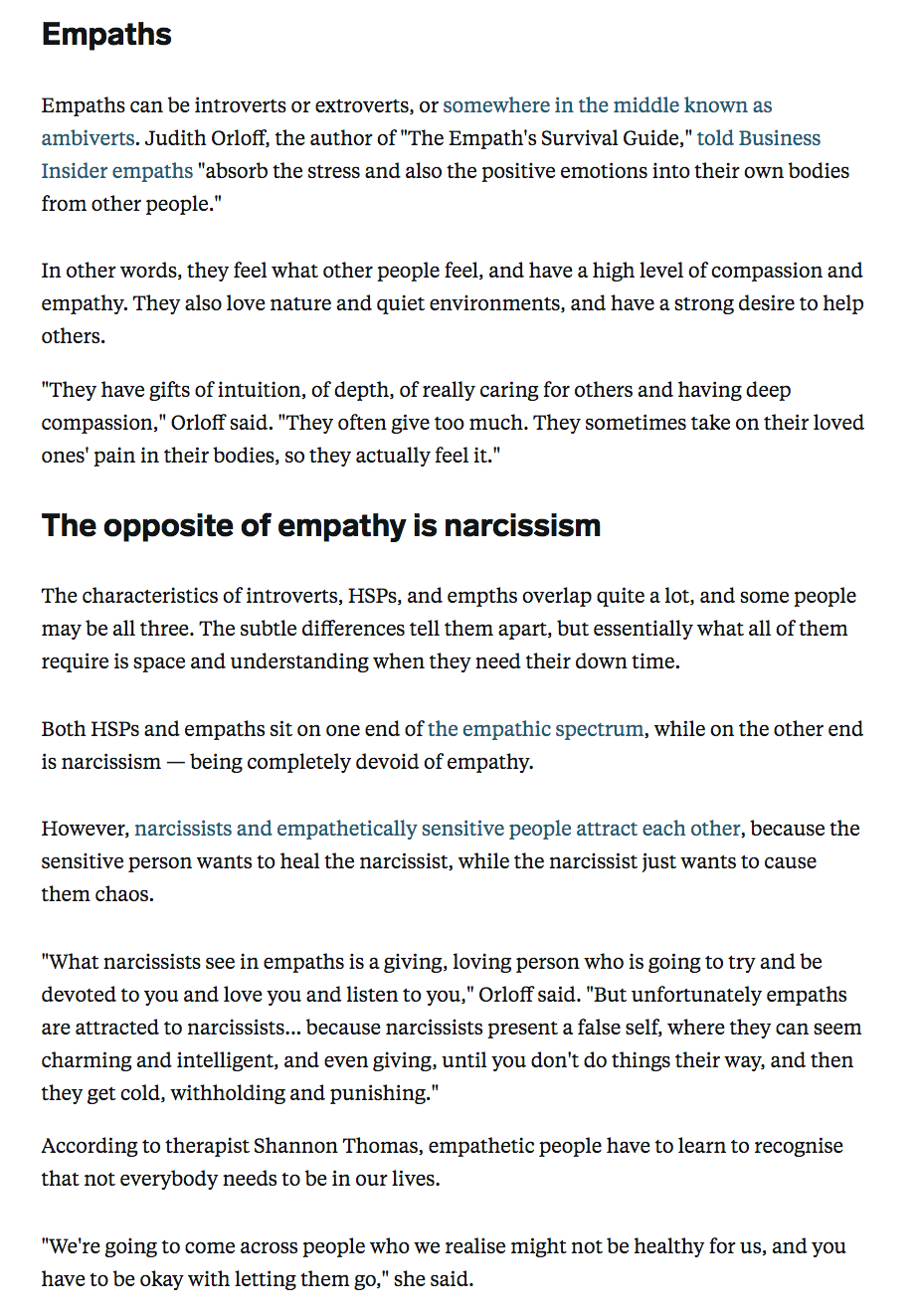 Article is from BusinessInsider.com

The Difference Between Empaths, Highly Sensitive People, and Introverts

However, empaths take the experience of the highly sensitive person much further. We can sense subtle energy, which is called shakti or prana in Eastern healing traditions, and absorb it into our own bodies. Highly sensitive people don’t typically do that. This capacity allows us to experience the energies around us in extremely deep ways. Since everything is made of subtle energy, including emotions and physical sensations, we energetically internalize the feelings and pain of others. We often have trouble distinguishing someone else’s discomfort from our own. Also, some empaths have profound spiritual and intuitive experiences which aren’t usually associated with highly sensitive people. Some are able to communicate with animals, nature, and their inner guides. But being a highly sensitive person and an empath are not mutually exclusive: you can be both at the same time.

To determine if you are an empath, see if you relate to one or more of these types.

You are especially attuned to other people’s physical symptoms and tend to absorb them into your body. You also can become energized by someone’s sense of well-being.

You mainly pick up other people’s emotions and can become a sponge for their feelings, both happy and sad.

You experience extraordinary perceptions such as intuition, telepathy, messages in dreams, animal and plant communication, as well as contact with the Other Side. The types of these empaths include:

Empaths have diverse and beautifully nuanced sensitivities. You may be one or more of the above types. In future chapters, I’ll also discuss specific kinds of physical and emotional empaths such as food empaths (who are attuned to the energy of foods) and relationship and sexual empaths (who are attuned to their partner’s and friend’s moods, sensuality, and physical health).

As you learn to identify your special talents, they can enrich your life and you can use them for the good of others.

Physical, emotional, and intuitive empaths can have different styles of socializing and interacting with the world. Most empaths are introverted though some can also be extroverted. Introverted empaths, like me, have a minimal tolerance for socializing and small talk. They tend to be quieter at gatherings and prefer leaving early. Often they arrive in their own cars so they don’t feel trapped or dependent on others for a ride.

I love my close circle of friends and mostly stay away from big parties or gatherings. I also don’t like small talk, and I’ve never learned to do it, which is common for the introverted type. I can socialize in groups for usually two to three hours before I feel overstimulated. My friends all know this about me and don’t take it personally if I excuse myself early.

In contrast, extroverted empaths are more verbal and interactive when socializing and enjoy the banter with others more than introverted empaths. They also can stay longer in social situations without getting exhausted or overstimulated.