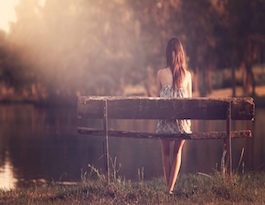 Growing up, my girlfriends couldn’t wait to hit the shopping malls and go to parties, the bigger the better–but I didn’t share their excitement. I always felt overwhelmed, exhausted around large groups of people, though I was clueless why. “What’s the matter with you?” friends would say, shooting me the weirdest looks. All I knew was that crowded places and I just didn’t mix. I’d go there feeling just fine but leave nervous, depressed, or with some horrible new ache or pain. Unsuspectingly, I was a gigantic sponge, absorbing the energy of people around me.

Thank goodness, as my intuition matured, I had a life-changing revelation. From conversations with other healers and from working with patients I realized I was experiencing intuitive empathy: the ability to sense what’s going on in others both emotionally and physically as if it were happening to me. Amazing at times, but also challenging. Let me explain the dynamics of empathy: the more people per square foot, the more our energy fields intersect–thus the tendency to become overloaded in high-density areas. This aspect of intuition is the most neglected and misunderstood.

I’m not referring to ordinary empathy–for instance, when you sympathize with a friend whose fiancee left her, or share your brother’s joy on the birth of his first child. Intuitive empathy goes way beyond. It’s the capacity to energetically merge with someone else and, for the moment, see life (positive and negative) through their eyes, sense the world through their feelings. If this describes you, it may be impossible to distinguish these sensations from your own, throwing you off center.

I know. I’ve been there. That my intuitive empathy has become a gift is mind-blowing–and a tremendous relief. Many of us never get to the good part of empathy because we’re not shown how. What ails us even eludes our doctors. We go in for care, but it’s like the blind leading the blind. No one know what’s going on. Empaths, unintentionally, can make even a good doctor’s life hell. They manifest such a barrage of “unexplained” treatment-resistant symptoms, that frustrated physicians write them off as hypochondriacs. Empaths are notoriously misdiagnosed. Patient after patient has come to me labeled “agoraphobic” or with “panic disorder,” having received only minor respite from traditional treatments: Valium and behavior therapy. Some were nearly house-bound. They’d all say, “I dread being in crowded places where I can’t make a quick escape. Forget department stores, busy streets, elevators, tunnels. I avoid them like the plague.” Sounded very familiar. So I decided to take a history of how these people processed subtle energy in the world, something all healers must be trained to assess.  I found many were undiagnosed empaths. For me, this changed everything. My job then became teaching my patients to center themselves and deal with the day-to-day nuances of energy more productively.

In my workshops I always inquire, “How many of you have intuitive empathy?” It’s astounding. Hands shoot up from at least a quarter of the room. Of those people, nearly everyone concurs, “I had no idea how to describe my feelings, let alone cope with them.” Then they’d dangerously conclude, “I thought something was wrong with me for being ‘overly sensitive’.” I want to dispel such a myth, illustrate how you can positively utilize this form of intuition in daily life. From telephone calls, letters, and feedback I receive during my workshops from New York to Omaha, I’ve seen how widespread empathy is. I encourage you to embrace your empathic abilities and intuition. They are gifts to be cherished.

4 thoughts on “Do You Get Drained By Other People’s Energy?”