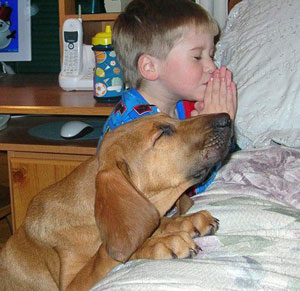 I love animals. They are powerful conduits of unconditional love. My editor wanted me to remove this story from “Emotional Freedom” about a dog’s compassion because it wasn’t between two humans. I disagreed and kept it in. Here is an excerpt from the last chapter of the book called “Facing Anger, Building Compassion.” I hope you like it. I hope you know that love exists between all sentient beings.

Compassion also provides the crucible for healing miracles to occur. One of my workshop participants told the following story. Two years before, she’d longed to get pregnant but she had a rare, serious type of kidney disease. Her doctor warned that pregnancy would overly stress her body, even endanger her life. Still, this woman’s desire for a baby was so strong she decided to risk it. Fortunately, she stayed well those nine months and her disease stabilized, which isn’t typical during pregnancy, a great relief to her, her husband, and the doctor. However, in that same period, her young Golden Retriever, her constant companion and ?soul-mate? with whom she was so attuned, was diagnosed with kidney failure. Soon after the birth of her daughter, this loving animal died, as if having held on just long enough to see her through.

Though cynics would dismiss as “mere coincidence” the fact that both contracted the same rare disease–especially when the dog had been perfectly healthy–I read this quite differently. For me, it seems rather to be a moving reminder of the interconnectedness of our hearts and the power of compassion. There was a special love between this woman and her dog. Could it be possible for one life to so empathize with another that it can sense, even assume illness? Certainly, something to contemplate. As a physician I know that love can create miracles that defy logical explanation. Selfless giving resonates with such mystery. How wondrous and far reaching compassion can be among all living beings. Each of us is capable of limitless love. The monumental implications of this fact continue to reveal themselves over the years, always giving me chills and re-clarifying my emotional priorities.

16 thoughts on “Can Our Pets Absorb Our Illnesses?”