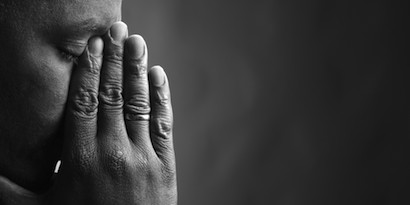 Depression is an emotion to be consciously transformed; grief is a reaction to loss that can transform you. Loss comes in many forms: the death of loved one, a pet, a job, a relationship. It’s a stripping away of a potent connection, leaving an aching emptiness inside. Despite grief’s agony, try to let it flow rather than attempting to change it or get it over with. Unlike depression’s emotional inertia, grief has an inherent healing trajectory that seeks to resolve itself. Choking grief off inhibits this forward motion and leads to depression. As I can attest, if we don’t shut down, grief can ultimately open the heart.

On January 24, 1982, I learned that my uncle Sidney had been murdered. A stoned teenage punk robbed him, then shot him point blank in the head, right after Sidney handed over the money in his business’s cash register. For over thirty years, Sidney and his brother Jerry had run “I. Orloff and Sons Furniture.” It was started in 1920 by my grandfather in South Philadelphia, an area that had disintegrated into a crime-infested ghetto. Uncle Sidney was a Humphrey Bogart look-alike who got into the role, calling his kids, wife, and me “Schweet-heart.” He was a modest, kind man. Everyone in the neighborhood adored him. When I moved to Philadelphia for medical school, Sidney helped me furnish my tiny one-room brownstone apartment overlooking the art museum. I remember watching him proudly lugging a brand new plaid couch from his store up five flights of stairs, an act of utter devotion. Uncle Sidney’s caring eased my waves of homesickness for California. He’d sometimes just look at me and beam: “My niece, the doctor!” When I later finished medical school at USC, he wrote me, “Your graduation announcement holds a place of honor on my den table. What a pleasure to renew our lives when you arrived with your companion Pipe {my dog} in Philadelphia. Please thank your mother and my brother for raising such a precious human being.” Three years later, my father, pale as I’d never seen him, broke the news: “Sidney has been murdered.” In the next moments of numbing silence, I staggered with disbelief. How could this be? Dear Sidney who’d never wished anyone harm. Why would a complete stranger want to kill him?

My grief at the death of my uncle set off a torrent of feelings in me with a momentum of their own. Shock. Rage. Anxiety. Sadness. Losing someone who loved me so much, and whom I loved so deeply, was unthinkable. It took a while for this brutal reality to sink in. I yearned to talk to Uncle Sidney, hug him, eat dinner at his house. But none of these everyday intimacies that you think will always be there were possible anymore. Even now, over twenty years later, though I’ve accepted Sidney’s death, I still miss him. Some grief you never fully get over. To this day, pangs of grief continue to resonate through me, not as a burden, but as a widening portal into the compassion of what enduring love means. In psychiatrist Elisabeth-Kubler-Ross’s iconic book, On Death and Dying, she presents common stages of grief. Denial: “This can’t be happening!” Anger: “I’m furious about the loss or at everything.” Bargaining: “I promise I’ll be a better person if only you bring him back.” Depression: “I don’t care anymore. Life is too unfair. Why try at all?” Acceptance: “I’m coming to terms with what-is. I’m devastated but I can continue to keep loving.” We each have our own time frame with these stages. Over the year following Sidney’s murder, I experienced every one. Sometimes I wanted to grieve alone. Sometimes I wanted to talk about it. Always I kept looking to the night sky for answers, as I have since childhood. Its spacious splendor offered consolation by embracing me in a oneness that reunites all love and lovers. The stars had Sidney in them: I felt them shimmering through me, bringing niece and uncle in communion again. I’m thankful for the support of family, friends, therapist, and the heavens that cradled me though this anguished period.

Depression can be a healthy stage of grieving, but people can get stuck there. What complicates grief is when it taps into early traumas or losses that contributed to depression. A chronically ill parent; a volatile divorce; death of close relative or friend. Your current grief is compounded by depressions that preceded it. Tip-offs that this is happening include: (1) Grief becomes mired in depression rather than evolving or resolving. (2) Old traumatic memories intrude on the present; you can’t get them out of your mind. In such cases, it’s imperative to obtain psychological assistance so you don’t become lost in the limbo of these feelings. Beyond this, stay aware of ingrained, depression-related negative beliefs that may get reactivated by the current loss. For instance, my brave cousin candidly said about an initial phase of his mourning, “My dad’s death reinforced the fatalistic views I used to have, how you can try and try but something can always be ripped away from you. I stayed angry and depressed a long time until I was ready to open my heart again and be grateful for each day.” I know how easy it is to become cynical or hopeless, particularly after the tragic loss of an innocent. But emotional freedom necessitates fighting not to give up. When you lose irreplaceable relationships, there will be gaping holes in your life. True, some things may never be the same. However, your future holds the promise for other rich bonds with other amazing people. Your dear ones who’ve gone don’t want you to stop loving. During grief, if old beliefs associated with depression surface, be kind to yourself, but seek the help you need to combat hopelessness.

In many patients and friends, I’ve seen grief catalyze an intuitive opening. Coping with death, in particular, tunes you into instinctual knowledge organically tied to the passage. Even if you’ve never considered the possibility of an afterlife before now, that question may become eminently relevant. Loss stimulates a part of you that may long to know. When grieving, notice any intuitions that lend insight. Pay special attention to dreams. After the passing of loved ones, it’s been commonly reported that they appear in dreams to assure us they’re all right. They know how much we worry. What’s striking is that the departed look younger, healthier, happier, no longer sick or in pain. Recently, I had one such dream following the death of Jim, the psychiatrist I described in Chapter 1 who’d been my savior as a teenager. He’d been suffering from cancer for months, which finally claimed him. I was moved that his wife invited me to the memorial service. Afterwards, I dreamed:

I’m in Jim’s home with his family. Jim is there too, but I’m the only one who can see him. He looks like himself, not at all a haunting specter. I ask: “Jim, are you dead?” He just smiles and says, “I don’t really see it that way!”

I awoke smiling too. Dreams about death are often conveyed with the lightness of cosmic humor to allay our worries. Intuitively, they enable us see that despite death’s physical finality, the spirit endures. Knowing this is enormously therapeutic when dealing with grief and in continuing a meaningful life. It may not console the part of you that needs a hug from those you’ve lost, but it’s feedback that they’re fine. We all die with our music in us and keep making it as we move on–an incredibly hopeful certainty. Swami Muktananda said, “The only thing you lose when you die is your fear of death.” We, the grievers, have it much harder. Still, accepting loss as part of life’s cycles eases your struggle with it. Unavoidably, there’s one appointment we all must keep. Once we can accept death, our own and others’, it puts the true nature of things into perspective, lets us savor every moment of our intimacies now. We can also more appropriately revere those who’ve passed without morbidness or trepidation. (In this spirit, some enlightened medical schools instruct students to consider their anatomy class’s cadaver they dissected as a “guiding hand” to remember throughout their careers as healers). Acceptance of loss doesn’t mean we like the idea of this sacrifice. But it does impart equanimity about such letting-go and a hopefulness about the longevity of love throughout time. Love never dies. It’s what animates the light throughout infinity.

When facing loss, try to keep breathing deeply and trust the process as grief transforms itself and you. I picture grieving as riding the tail of a comet on its orbit compared to the downward arc of depression’s stubborn gravity. Meanwhile, addressing old issues related to depression, as well as listening to intuition, enables you to psychologically work through grief and accept loss more easily.

3 thoughts on “Healing Loss: The Difference Between Grief and Depression”